Skip to content
Home » Blog » Shelton Auction and Realty : Much More Than Meets the Eye 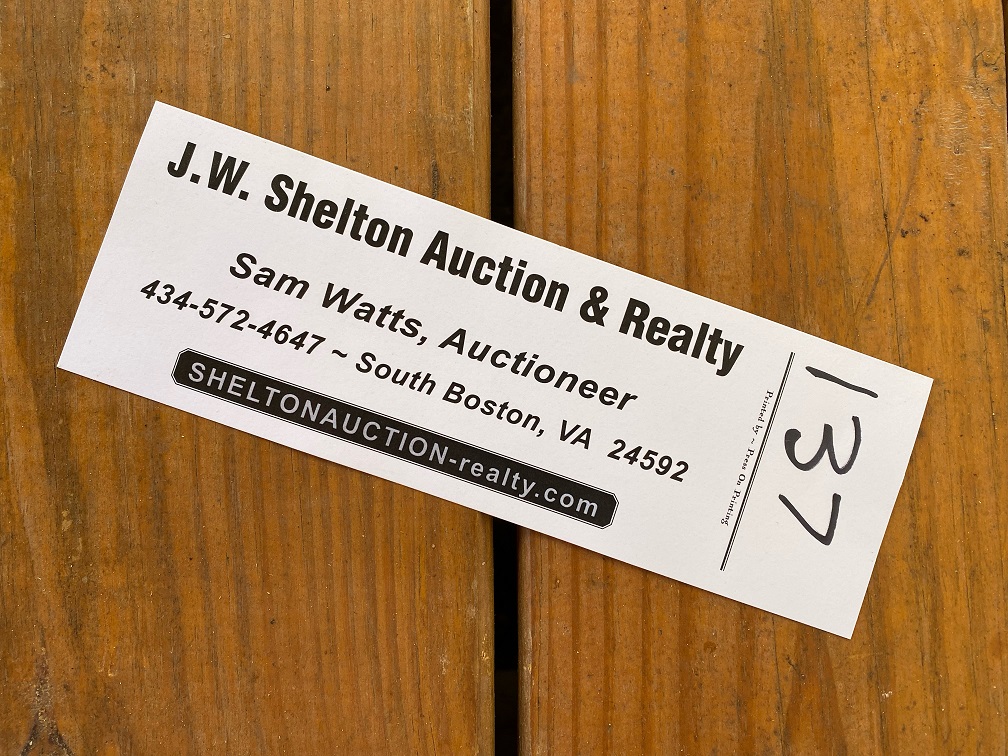 SOUTH BOSTON – The history of J.W. Shelton Auction and Realty began in 1955 and includes a lot of knowledge and skill passed down from one generation to the next. It also entails much more than the average auction attendee probably realizes.

Current owner Sam Watts worked under the original owner, J.W. Shelton for years, learning first-hand how to run every aspect of the business. Sam didn’t plan to become an auctioneer, but, according to Wanda Jennings, Sam “followed Mr. Shelton around and saw what it was like” and got the itch.

What followed was auctioneering school and a three-year apprenticeship under J.W. Shelton. By the early 1990s, Sam had become the owner of the business, retaining its well-known and respected name. Shelton, by then getting up in age, stayed on and worked into his 80s, Wanda told me with obvious respect.

Bitten By The Auctioneer Bug

Decades later, Sam and Wanda found themselves nurturing and encouraging young Tyler Crute, who now serves as an auctioneer part-time, working around his career as a Halifax County deputy sheriff. Wanda said Tyler started hanging out with Sam on the farm when Tyler was a young boy, and was bitten by the auctioneer bug.

With history seemingly repeating itself, Tyler went to auctioneering school and then, after passing a four-hour state exam, began working under Sam. I had no idea there was so much work involved in obtaining an auctioneer’s license or that it took so much to keep it. Auctioneers also have to participate in a certain amount of continuing education every other year, and regularly pass more tests in order to maintain their license.

Looking Up The Laws

I confess, this piqued my curiosity, so I looked up the Virginia laws pertaining to auctioneering, and discovered that not just any old person can become an auctioneer. He or she must have the education and training, of course, but also be bonded and have a clean criminal record.

I also visited the Virginia Department of Professional and Occupational Regulation (DPOR) and looked up the regulations for auctioneering schools. Wow! According to the DPOR website, auctioneering schools “must offer to Virginia candidates a minimum of 80 hours of classroom and field instruction in the conduct of auction business to include fundamentals of auctioneering, elementary principles of real estate, brokerage, contract drawing, advertising, sale preparation, bid calling, settlement statements, ethics and exposure to the current rules and regulations of the Virginia Auctioneers Board. There must be at least five instructors who have been licensed auctioneers for at least five years and who specialize in different fields of the auction business.”

In other words, it’s serious business.

How Serious Is It?

Talking to Wanda, both during an actual auction and later in a phone conversation, I got a real sense of just how serious it is. Being an auctioneer is much more than the “chant” we all know and enjoy hearing. Watching Sam and Tyler at an auction in Nathalie, Va. last summer, I kept thinking how much an auctioneer has to think about at once.

They have to keep up the chant, while also watching for bids and paying attention to the crowd and the items they’re auctioning. Wanda explained that they also must have a feel for the bidders and be mindful of how much to raise the bid each time.

“You have to know how much and when to up the bid,” she said, “so you don’t throw people off.” Wanda told me that the ultimate goal of every auction is to get the best possible price for the client.

Auctioneering takes good people skills as well. When I asked Wanda to relate an odd thing that happened during a Shelton Auction event, she related Sam’s story of an older man and wife engaged in an obvious disagreement about bidding. The wife was making bids on a parcel of land, and when she would place a bid, her husband would hit her on the head with his cane. It ended up in a full-fledged brawl, with cursing and people attempting to pull the couple apart.

As a rule, however, said Wanda, family disagreements are the saddest thing about auctions. “When the family doesn’t agree, and they are fighting among themselves, we hear different stories from different people” and it makes it difficult.

On the other hand, though, she said it is most rewarding when the auction brings more than the seller asked for.

“It makes them happy,” she said, and in turn brings the company satisfaction. She said lately, many auctions have exceeded expectations.

This year, since Covid has affected almost every aspect of life, she said, many people are eager to get out of cities and the north, and move to the more temperate Virginia/North Carolina climate.

Many are also searching for rural homes and land where they can escape city crime and grow their own food. She said folks are “coming from everywhere” to the Halifax County area. Recently, J.W. Shelton has served real estate clients from Connecticut, New York, New Jersey, Vermont, and Indiana, to name a few areas, she said.

Driving Up The Demand

I asked her to walk me through a typical estate auction, like the one I went to in Nathalie last summer. Once again, I had no idea how much went into it. I have to explain that last summer was the first time I’d attended an auction since I was quite young, and that has been a minute.

Wanda told me that for at least 30 days prior to the auction, the company is making lists and getting pictures and placing ads on auctionzip.com and in local newspapers. The company also has to line up clerks to write down bids and handle the money on auction day. Groundspeople, who hold up smaller items and catch bids, also have to be recruited. Wanda said, “We also have to be sure we have change and food on site on the day of the auction.” Equipment like bobcats must be on hand to move heavy items. There are a lot of logistics to deal with.

When the auction ends, the company can’t leave the site until all sale items are gone, or arrangements have been made to pick up the remainders.

After the auction, Wanda said, the company has a week to tally the records and pay the client. Meticulous records are kept, and she has to be sure all cash is accounted for and all checks have cleared. To get the final tally, she said, “I check it this way, crossways, and upside down to make sure it’s right.”

And I thought those attending the auctions had all the fun.

Q: Where can I find more information about Shelton Auction?

Phyliss Boatwright is a journalist who for years reported Person County news in The Courier-Times. She has published two books and several short stories. Her book review show, Turn the Page, can be heard on WKRX, 96.7. For the past 10 years, she has taught journalism and served as public information officer at Roxboro Community School. She can be reached via email at phylissboatwright@gmail.com.